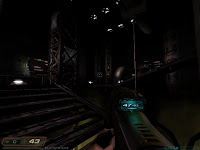 Right before the disastrous invasion of the UAC's Mars outpost, priority cargo was shipped directly from Delta Level 2 to the former medical research and testing center, the Omega Research Facility on Earth. It contained a live specimen that the research teams had brought back from their expedition into the realm that was beyond the teleporter. The creature was dubbed "revenant" by the scientists, chiefly because the only description of it is a reanimated skeleton that seems to have somehow been brought back from the dead. Study of the creature has been difficult, and several staff have been injured. The experiment is extremely aggressive and seems to attack on sight. UAC HQ has recieved a distress call from the facility in the early hours of the evening. There is a code red, the experiment is loose. Last reports say the facility is under lockdown and the situation is under control, but those reports were over an hour ago. You have been assigned to go to the facility and evaluate the situation. Containment is vital.

This is not the first release from the author that is more focused on MP releases but it's a defenetly massive and interesting release. The story isn't quite original but at least is one of the most efficent used in DOOM3 mapping.

Design is from above average to brilliant with a lot of interconnection through the whole facility in all axis directions (meant you travel allways forward but take also elevators -up and down- and seems to travel through a huge well interconnected facility). Used of custom textures always increase the interest while you progress all architecture and design seems quite fluid and doesn't increase (or dicrease) in catching your attention till the end. the only minor draw is that in several place you can walk through walls and end in the other side of the map (clipping error) that should have been avoided by a correct beta testing...

Gameplay is fairly balanced but increase in difficulty (less health, more enemies) in the second part which will lead to several thaught combats. Progression is streight forward and won't provide any (except a juming one) puzzle. PDA's info and happening will keep you busy through you progression but both with no real immersion through a strong storyline, this could be perhaps a little disapointment in balance with all the rest. It could also be notice that codding has been apply to give some enemies more power, and that you can try to solve several access to 'secret places' (not that evident).

In conlusion: This interesting release does suffer from minor issues (clipping bugs, missing storyline, puzzles, use of a custom enemy as main objective), in the other end the impressive layout and design and the quite good balanced gameplay make it a real enjoyable episode that will perhaps disappoint several people by the abrupt, but original, ending. Another recommanded release that is well worth the download. 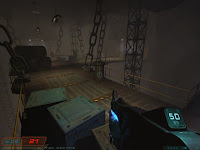 Posted by Unknown at 4:15 AM No comments: 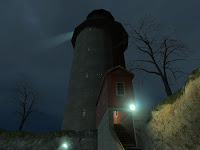 None describe by the author but like in Part 1 after waking up in you home you will need to go to a secret base near a cost to kill another mad scientist that makes experiments...

After playing one year ago the first release of Aro called Part 1 (info available from www.planetphillip.com) and since I like it a lot a really was waiting for part 2 and to be honest I was a little disapointed.

Design, Like In his first release is really from above avearge quality. Attention to detail, without overusing them, is really well done to make something enjoyable from outdoor to cave featuring,this time, some well made voice acting. It sadly looks defenetly to short especially in comparaison with the First release.

Also the fact to reuse the first part (House of Mister Deathwish) could have use a more suitable transition like for example a teleport or a secret sewer with both or even a small cutscene showing Mr Deathwish going for his journey and not simply put you without any message on the secret coast.

Gameplay is not as much complicated as the first but also provide puzzle that not always seems obvious but this time I had more chance to find an easy way to pass through. It was one time morewell thaught and honestly enjoyable. Regarding fights and combats there are easy to pass thorugh or simply (in some part) could be avoided... Last part is more a typical combine reinforcement gameplay enjoyable but not more. It is important to note that in the srarting lighting tower is you go up by foot and not using the lift you 'friend' could not open you the path to the next level...

In conclusion: This is for me another really enjoyable release from Aro but I was defenitly looking for something more accomplished and polished regarding his first release. I just hope there will be a part3 and that this time the expirience will be less linear and longer (like in the part 1) 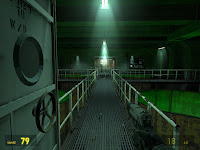 Posted by Unknown at 3:10 AM No comments: 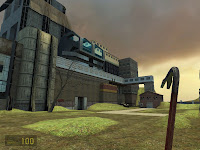 Story:
there is no story behind but it could be easily put together : Dog as just been capture by the combine forces and seems to be hold in a manufactury. The way is to find him back and to save him.

One time more passing through The Guildhall at SMU made me find another interesting short but sweet release This time you will travel trough an industrial complex in a fight and puzzle mix to find and deliver Dog.

Design is well put together in a slithly above average architecture and design. The action is mostly indoor. The layout is made, in my opinion, in a little repetitive texturing but it fits well to the industrial theme.

Progression is obvious in a linear way but mostly oriented as a maze through lot's of upper floor. ambush especially manhacks (this gave me a new idea of gaming using the gravity gun to catch them and trow them on combine...quite efficiant) that will give you a lot of challenge increasing till the final central command where you will need to battle against combine to save Dog. The whole progression is well mixed with some puzzle (pillars gettting down, this one was certainly influenced by some Duke Nukem experience) and console activating button. Everything seems obvious but makes it really enjoyable.

In conclusion: Another good dig out of grave release from The Guildhall at SMU . The author who did other intesting stuff especially for Call of Duty comes this time with well action packed mission that really diserve you attention. Get it as soon as possible and you will be happy with it 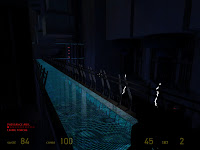 Posted by Unknown at 1:55 AM No comments: