... That day should be the beginning of great celebrations, because the mankind created machine for transfering a biological material. But the scientists at Black Mesa didn´t count with surfeit of transport nucleus, and the whole transfer can sprain out of control. Something like this has happened during the main test, which was initiated by Gordon Freeman. Thanks to the great energy, that was produced by transporter, the secondary leaky nucleus was started. It´s handling has taken off experienced team of scientists, including Dr. Jonathan Wood. It is hard to say where was the error, but the weird monsters started to appear all over the complex, and they slaughtered every human existence. Some dashers tried to escape, the others self-murdered and the rest with panic fear has hidden in the darkest corners of the facility. Rescue should appear quickly, but what followed can be described only as "erasing the clues". Government simply didn´t want any evidences about the situation, that happened in the New Mexico. But one thing was clear - there won´t be any help from outside. Jonathan like the only survivor of the team began rescuing his own life, but after many fights and pitfalls he was captured by an army forces. Now he is awaking in the unknown part of the complex, and his only friend is fear, that herds him forward...

Breakdown 2 is the sequel to Pavel Koten’s first release. For this one Pavel keeps his way of making a challenging experience but with some sweetie innovations. Design is well put together (even if some parts are a little too repetitive) and takes place in another research center after an accident.

Even if some external help is provided here and there the challenge is omnipresent (If you are not an experienced player I recommend to play it on easy skill) especially for the first part. General design is above average and well put together with small puzzles (which are most of the time evident) but you may encounter in places some r-speed problems due to an overuse of entities.
Enemies are more alien oriented in the first part and later more grunts oriented. Finally with some cool innovations (some book left that you need to read during your travel, an entertaining sports car ride…you will certainly enjoy this realisation.

In conclusion: Certainly better than his first release, this one left me with a good feeling, worth for at least two hours of gaming

Rating: A B C D E (84 %)
note : picture where taken without permission from the author's site where you can look to some more of them

Posted by Unknown at 3:53 AM No comments: 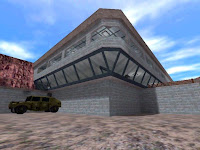 Your friend and fellow scientist, Bob, is missing. Rumour has it that he fled the country after selling company secrets, but you know he would never do such a thing. Last time you saw him he was talking of "nearly exposing the administrators' malpractice" and "preventing an accident that could destroy this world". He wasn't very specific about anything but he seemed sincere. Black Mesa might very well have caused his disappearance. The last Black Mesa announcement, only minutes ago, said something about a "minor accident" and that "to assure employee safety, all non-security personnel are to remain at their stations until further notice. Black Mesa Research Facility will temporarily be closed down..."

If this incident is the thing Bob feared so much, you'd better find him. Fast.

Saving Bob is a more than honest add-on that came out in 99. The mission is quite simple. A research facility has been attacked by grunts (no its not Iraq here!) because it seems that a scientist working under the authority of Bob Black (head research) has discovered something top secret. Your mission is to save Bob. Design is really neat with some interesting ideas (back in 99) Difficulty is increasing with the progression, and features some challenging combats (mix between grunts and aliens). Puzzles are obvious but well put together and also feature a ‘saving’ which was a really original idea in 99. Finally there is nearly nothing to complain about except perhaps some r-speed problem (especially the final part) but that is easily forgotten by a good ending.

In conclusion: This is a small but nearly perfect pack that features all the needed elements with addition of some new wads (...non naked Women). A real good oldie 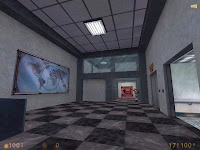 note : picture where taken without permission from tenfourmaps and 3D M R feel free to contact me if you would like that i remove them

Posted by Unknown at 4:08 AM No comments:

Omicron I for DOOM3 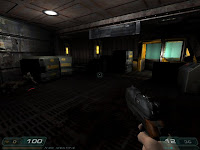 Action takes place in an aging Mars facility that contains cargo processing and power control systems for the larger Omicron complex. Demons have overrun the facility and the player's goal is to make it out of the exit and proceed to Omicron II.

First of al this is another interesting level for doom3 done by a Student at Guildhall And this time it's a familiar name cause back in 1997 Gabe release two great map for Duke Nukem (The Duke Nukem Aquatic Museum and Homeworld) then try to create something massive also for Duke Nukem but was mostly abandonned due to team's problems if I remember wright, Hopefully a third level was published in 2001(Called Nightfall) I made some review for them at AMC (that has still an active forum for Duke Nukem Community but Rest of the website is for over 3 years 'in maintenance' ) and all maps were rated beween 85 and 90%.

Back to the main subject...Omicron I is a really atmospheric substation in wich you arrive by a small 'maintenance' train. Atmophere will directly catch you attention and will make you travel through a quite complex building that is full of vent and pipes you can travel.

You will so discover that something wierd happens on this site (reading PDA files) and that you should restate the power to evacuate this Base. Architecture is for me immersive to impressive through the special feature Gabe created (complex scripted moving machine and Forklift). The general layout as a good use of lightning, and choice of texture from big room to the shortest vent is great.

Gameplay is also a good surpise according this small release some traps a good spread of weapon, ammo and health put together with variety in enemies/creatures placemement, add a certain fun to play through it, with several spots that may be challenging. erhaps some more traps and challenge with a wide building would have create something even beter but it's a school work so limited in creativity.

In conlusion: The different cohorts that have been actually graduated from the Guildhall have produce a lot of interesting small release for games as Doom3, Quake4, HL2 and is certainly a place to visit. This one is another example of quality a student can produce in a quite limited time, it's defenetly too short but well worth the download. 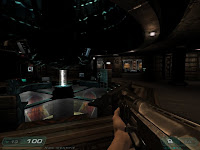 Posted by Unknown at 3:43 AM No comments:

Someplace Else for HL 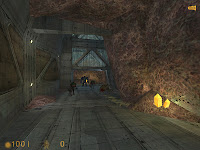 Someplace Else is the second time (first was Aftermath) that, a one map release for Half-life, really catches my attention. because the experience was brand new to me.
Three Years ago, on a cold weekend, I had a strange experience… During the afternoon in a soft dark room, I was suddenly caught by a voice coming from nowhere telling me I wouldn’t survive this kind of experience… Some flashing pictures…was it a vessel or an asteroid or perhaps a mix of both… I had pain in my head…some voice was talking to me but I could hear it…I was cold…the wind was furiously blowing…some more pictures…army soldiers killed here and there…some mysterious sound like If a Yeti was running on a steel floor…it was quite dark…I saw something…a yellow-green sphere which was whistling….more sounds were coming…some alien slaves voices…it was a nightmare…no it was .....Someplace Else.
In a few words this is a summary of the experience you’re going to go through (or try to survive). The set place has a kind of nightmare reality like in alien movie (first and second chapter). Everything is well put together: design, enemies placement, health, weapons/ammo. This is even ameliorated by some puzzles and traps you have to go through and enhanced by the script voice that is your only ‘friend’.

The design is atmospheric and really create (back in 2002) another approach from Xen world everything is really neat and enhanced by custom texture, progression is not too complicated in a not linear way with perfect balance (even if some places will be hard to get through) between gameplay and puzzles.
Since this release Adam became a really important person from HL community and even if Parallax experience was kind of abandonned (there is still a beta release available) the follow up of 'Adam's' Life 2 catches a lot of attention from the community through Minerva Trilogy a another must phave for HL2.

In conclusion: This is a must to be played through, and this time, for sure, you gonna like a Xen based map. 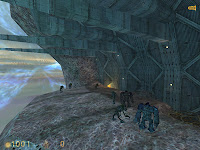 Posted by Unknown at 4:31 AM No comments: