The Gatehouse for Doom 3 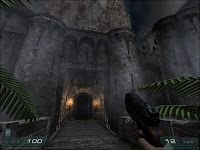 It appeared from out of the mist. “Every century, it materializes under the full moon” says the inhabitants of a secluded European village. They say that a dreadful king of demons inhabits this mystical castle and that his curse is what allows this fortress to return every 100 years."Nothing but superstitious fairy tales." That’s what people would have thought the last time this anomaly appeared. But things have changed. Two decades ago, Mankind was nearly exterminated by an army of pure evil. This "curse" would not go unnoticed this time!Mankind needed to act quickly. They did not waste time sending in a recon team to gather intel. Instead, a strike team was immediately dispatched to neutralize whatever threat is lurking inside that mysterious stronghold. After all, we don’t want them(whatever is in there) to make the first move. It’s too risky.

* * * * *Hello, Marine! You’ve been assigned to this crummy job. Your squadhas set up camp in a secured Gatehouse at the castle’s main entrance. Service lights, beds, and supply crates cover the floors and walls of this ancient brick structure.The past few days has been nonstop killing of any and all demons that lurk in the dark corridors of these looming structures. Most of the squad have ventured deep into the heart of the castle. Only a handful of marines, including yourself, was left to guard the entrance and dungeon perimeter, just in case the demons try to trap you all inside from the only way out.For the past few hours, you have sat out in the brisk canyon just shy of the drawbridge, listening to the radio chatter of gunfire and growls. Guard duty sucks.Suddenly, you hear pistols firing off in the Gatehouse nearby. It was supposed to be secure! Get the hell back in there and help your squadmates! If these monsters are ever allowed to leave the premises, Humanity can once again become endangered. The source of this threat must be eliminated. Your mission is simple: kill withoutquestion. This place needs to be cleaned up before it becomes another Hell-Portal.

The use of new content and the theme visited (a gloomy castle) make this one an interesting release now that Doom3 becomes less followed by young developers.

Design Of this one with a intro cutscenes make you direct immerge into the map. The layout is perfect and will make you travel from place to place to recover items and follow somehow a story through PDA’s information. Even if it’s mostly straight forward with some backtracking the environment isn’t too repetitive and traps and surprise will make you life a little bit complicate while you ‘re progress…the custom content also add a real castle feeling

Gameplay is well balanced with good enemy placement, weapon and the survival stuffs put always before or after some heavy fights…objective are clear but you may sometimes get lost, this being normal in a castle. The challenge increase with you progression but, hopefully in my opinion, never becomes a nightmare. According the ambiance more traps, lightning effects and bad surprise should have been scripted, also some more custom sounds like scream would have certainly add another dimension to this quite enjoyable experience.
In conclusion: I really thought that the best for Doom 3 was behind us this new fresh breath I a good reason to justify a Doom3 folder to sleep on you Hard Drive, if it’s not the case you should directly reinstall it… 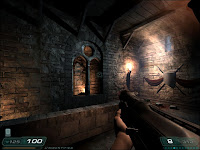 Posted by Unknown at 2:51 AM No comments: