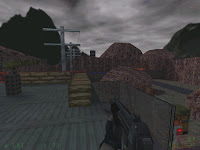 
Story
In the early 21st century the U.S. fight several anti-terrorist campaigns in the Middle East. Bickering in the world community over the morality of these campaigns eventually leads to the withdrawal of China and Russia from the U.N. Even NATO is divided and it soon becomes obvious that America's only real support comes from Great Britain.

In 2009 the league of Arab nations invade and occupy Israel. The U.S. and Britain come to Israel's defense but it is a struggle that will eventually be lost. China and Russia are supplying arms and troops to the invaders. Tactical nukes are used in the offensive marking the first time nuclear arms have been used in war since WW2. Six months later, India falls to Pakistan. The world is in a state of shock.

In 2010 Russia, China, Vietnam, North Korea, and the entire Middle East form the Eastern Alliance. They quickly expand into most of Europe, Asia and Africa. Since they possess a large nuclear arsenal plus most of the world's oil supply, no countries, including the U.S. are in a position to oppose them. A cold war sets in that would last for 7 years

It is suspected that the Alliance, headed by Russia is working on cloaking technology. It is rumored that they have discovered a way to bend light, making it possible to render things invisible, such as troops, weapons and even missiles. Despite their best efforts, U.S. scientists are unable to crack this technology.  This would prove extremely detrimental.

In January 2017 the Eastern Alliance launch an attack of cloaked nuclear missiles upon major cities and industry in North America. The U.S. is helpless as all but 2 of its retaliatory missiles are shot down. What's left of the free world watches in horror as Eastern troops invade American shores in an attempt to occupy the country. Even though most of the command structure has been wiped out, the Americans aren't just going to roll over. A fierce fight ensues that would last for months. This is where you come in. Corporal Adrian Shepherd, a soldier with grit and determination.

Intro: this is not the first try from Mr White in mapping I gave a some solid experience from a first pack review also on this blog called escape for Quake 2 to two interesting mission for Half-Life and a bunch of multiplayer pack and maps this seems to have been one, or even perhaps the last release. It has a good storyline, well interconnecting use of HL and OF and some custom content include music, texture and voice acting

Design: the mapping experience from the author is quite high already so you will find the best out here from outdoor to indoor places, with some interesting cutscene non repetitive expeirence without those hallways that get you boring, the use of custom texture and skyboxes, especially for the city part create something totally new, lightning is also really enjoyable like all those trigger effects that will happens while you progress. The experience really provide a well balance progression: barney will help you on some places on other you will need to travel to complex ,city, or even mountains without to forget to put here and there some well thaught puzzles also visualy enjoyable.

Gameplay is really well fitting with the design of the mod, the progression is mostly linear and oriented to combats with a perfectly placed ammo and health the experience is really immersing without causing any frustration even for the jumping sections and especially the radioactive one (second screenshot). All those cutsenes really add some breath to the mod and try most of the time to immerse a little bit more the player. Another interesting use of what can be implemented is the cooperative part with your squad ore some barney will help you out for your progression the minor flaws in that most of the time they just shine from a corner or a helicopter without any linking storyline.

In conclusion: Certianly the last release from Mr White that really use all the skill he has been implemented for arround 5 years to create this final opus. Even if everything is really enjoyable in this mod it's perhaps a little to classic regarding what came out the past 5 years and that's why it certainly deserve a 9 out of 10 but not more. I think it's still certainly one of the best mod for Opposing force 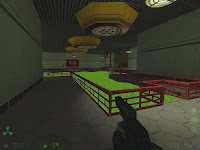