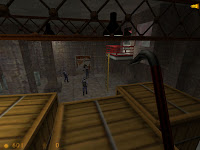 You have failed. the Nihilanth still lives. Fortunately, before your failure, scientists managed to teleport you to a secret lab. The problem is that a secret agency has constructed a special device, letting the Nihilanth come to earth. You must destroy this device, before the worst can happen.

This one seems to get some interest recently through several post at planetphillip, I decided to give it a try and was plesently surprise.

Design is conventional with sometimes some lack to detail but also in the other hand attention to design with innovative hallways and places...the author tells that he did some mapping for CS and he certainly got a good skill, the progression is not boring, gman appears several time and except some outdoor part and something more immersive for the player (with more on text message, voice acting or puzzles) that is missing, all the rest that is needed is present.

Gameplay is from the classic bottle with one or two seenes some traps and a streight forward progression well balance with combatsthat will make you progress to the nihilanth chamber. There is no real suprise it's just a succession of even and action that will lead you to the final goal with here and there some bugs (for me the mad scientist runiing inside me and make me stuck)...but it hold you busy with a fair enjoyment till it's end more thorugh it's correct gameplay that it's mostly oriented combat action.

In conclusion: it's a simply classic enjoyable release with nothing special for the short download (but who cares for this now) and the short playing time it's well worth to be played 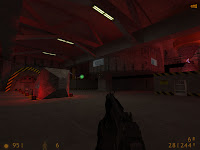 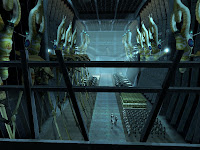 In Rebellion, you play as Mandella, colonel in the Confederation, a powerful military force. At the beginning, you explore the mothership as you’re asked by admiral Spade to attend your briefing. You’ll discover that you’re part of the first attack wave sent to storm Tor29, a little colony lost in the Nephele system.

Accompanied by your best friend, major Threepwood, you’ll face an oddly weak resistance. Why does the Confederation unleash its wrath on a colony that is clearly of no match ? What hides behind this conflict driven by doubtful justifications ? These obscure reasons are not to please you and Threepwood.

Will you carry on following blindly an authority fouled by power and arrogance ? Or will you break your former links and embrace a cause that seems fairer to you, however desperate it may be?

Maybe these are favourable times for… Rebellion.

A new creator just came up at the starting of 2009 and to be honest it was really a good surprise.
With an experience which had something different from what we have seen before even if in my opinion like for forward motion the author, while creating is mod, took perhaps a direction of making a mod that becomes a little too compicated...

Design was pretty good with perhaps some detail flaws (marble floor if the first metallic section)
but also manage to bring you some impressive part like the storage hall (screenshot1) but it was for sure above average in term of quality and architecture.
Gameplay is special, cause for a first part you play as a combine chief and make mission in order to kill the rebellion whish was for me, an especially the part with the storage containing civilian, quite annoying; after things get back to the normal way of HL2 gaming.
In addition to this fact the author also took a mission more oriented on movie/comics interaction...to explain a little my point of view you will, during this episode, more follow conversation and read on text message than actually play...creating for me more frustration than real enjoyment by the fact that the action is too much oriented, on a static way. (not easy to translate my frensh opinion into english...sorry for that).
Appart from this and taking the other point of view, the storyline is strong in a kind of movie/comics view that add lot's of humour and 'living' to the different actors like in eveday's life.

In conclusion: Raphaël defenetly manage the HL2 engine and was able to create something differents that wanted to immerse the player into a strong storyline with an everyday's life feeling. Sadly in my opinion those idea came with a lack of gameplay that can cause some frustration to player which was my case...I still think that a lot of gamers are going to like this fresh touch of gameplay 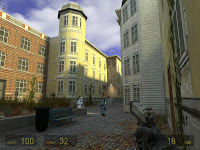 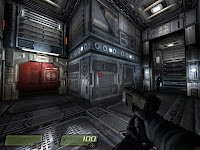 
Description:
In this map which takes place in the Quake 4 universe, the player takes on the role of a space marine who has been separated from his squad and lost most of his equipment. My goal for this level was to create engaging and satisfying gameplay while only allowing the player to use the blaster gun, which is the first and weakest weapon that they player receives while playing through the campaign. In order to accomplish this, I added the gameplay element of environmental destruction, which the player can trigger by shooting certain objects in the level within a certain time limit. This allows the player to have a feeling of power when he creates large chain reaction explosions to solve puzzles and destroy his enemies, without actually giving him a more powerful gun.

This is defenetly a new approch in Quake4 FPS more base on interaction with the environment than with simple fighting, you will need to solve small puzzle to be able to join you squad. Don't forget that most of the action that take places is indirectly performed and if you don't know what to do next there is a short video of the level viewable at Robert Gee's page.
Regarding this release it perfectly mix design with (inter)action and even if like for most of guildhall students releses it's too short... it's another must play experience.

Design is well done with a good attention to color and environment in a enjoyable way to progress. There is certainly too much pipes out here but regarding the fact that it's mostly needed to progress it doesn't really bother.

Gameplay is special, it's less oriented to fightings and more oiented in small interaction with environment to make progress to your squad. The environment is also active with robots working, sounds and voice to make you really get into this short experience. alll text objective really explain what you need, as a next step to do.

In conclusion: everything is present in this small release fight, thinking, objective, ambiance and gameplay what more do we need except more gaming time. 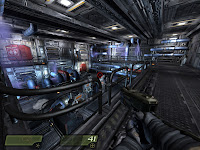 Playtime: 10 min (depend if you can easily understand/solve the puzzles)

Happy New year to you all readers

I wish to all of you the best for the upcoming year(s) and would like to thank you all for your discrete support during this past 2 years (I didn't have a lot of feedback according the over 70 post i made), but having more than 1000 hits in arround 2 month and a half was a great surprise that encourage me to update this blog more during the last two months.

I think I won't change the rules during 2009 and will continue with reviews about things that let me a good feeling while playing, I just hope to succeed in posting arround 30 review a year like for the past two years.

Just want to remember that you can contact me to submit something to review or simply post your feeling about the reviews, I had also a mixed opinion about digging some old stuff for game such as quake, duke nukem, Redneck rampage but i'm not sure if a lot of people would be interested.

Oh and don't forget that soon the new virtual rally championship will take place at Rallyesim just hoping to do better that in 2008 where i finished on the 20th place on over 600 players that were able to score.

For this year I also launched with my friends from our WRC private team a blog (only in french) don't hesitate to follow our carrier there during this year
Posted by Unknown at 3:50 AM 3 comments: