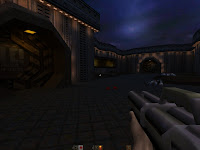 Amari Aliquid is a waste themed level but with a fresh look with all new textures by Metlslime, as seen in Oblivion. Your mission is to raid the Strogg fortress and fight your way into the basement of the complex where you'll battle the cloned second Makron.

Having defeated Makron in his evil palace, you escaped in a pod as his home fell to rubble. Unfortunately, your pod wasn't too effective. No wonder Strogg are losing the war. You end up being pulled into the Strogg planets atmosphere and crash to the ground. Even more unfortunate is that Makron isn't dead. The Strogg medics have built a new Makron clone already, and was activated as soon as the original Makron was destroyed. The new Makron has downloaded a recent copy of its predecessors brain, so this time he'll recognize you. Typically, you have landed in the same vicinity as the new one rests, while Medics finish up the job. But this time it will not be so hard, as with it being such a rush the base is not properly guarded. Also with it being such a well kept secret, the Strogg were forced to build it in a small waste factory where the humans would not bother looking! Back on Earth no one will know about this second Makron, so it's up to you to either kill him yourself, or (preferably) find a bigger pod to steal! As you approach a back entrance, you just know there will be no pod waiting for you here - just a pissed off Makron....

I'm back with a marvelous nearly perfect release from one of the best and most prolific mapper according Quake series (I & II). All release from the author are so well crafted using most of the time a lot of cutom content that it create so great moment of gaming that it becomes memorable.

Amari Aliquid is not an exception with the helpfull collaboration of Metlslime, Kona put together a 6 maps pack episode well handled with tons of new textures, an immersing gameplay and a wonderfull architecture.

The action take place like the origial game with a same 'revisited' story, you will so through you progression, from the wasted sewer to the upper level collect all dataCD to destroy the satelitte and after difeat the Boss.

Design is really great, use of color for every themed map in association with new texture create always a stand alone ambiance architecture altenate huge 'high sky' realisation with complex indoor building in a well balance travel from indoor to outdoor. Every new place will look like a new intesting surpise while travelling through all levels well connected to make it huge but without falling into a 'lost maze' quest. You will encounter while you travelling all the things that makes this game so enjoyable : lot's of secrets places, small action puzzles from elevator to gates with computer access, some voice acting, travelling plane arround all those things being put together really create the best experience.

Gameplay is from the same bottle as design: Travelling is non linear and interconnect al map well together, fight are increasing with progression and so do also the way you recieve weapons and ammo. Challenging is perfectly balance to make it challenging but not frustrating, enemies (more than 300 for the whole unit) are well placed and in sufficient number in relation with the place you will meet them. Objectives are comprehensive and not that difficult to achive. Making the whole episode a really enjoyable experience

In conclusion: One more time I feel to have the right decision to replay (or simply play) several release that came out arround 5 to 10 years ago for the second opus into the Quake gaming history. This one through the fact it was nearly perfectly put together is another prove that Q2 is a must have game for every FPS fan and that a lot of release (from the over 400 releases available through the net) are well worth to give it a try even if the graphic quality has more evoluate till then. So if you want a enjoyable experience into a well balance gameplay crafter with beautifull cutsom architecutre using custom use of color and textures this one is highly recommanded. 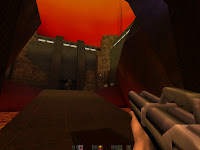 Note: for the one interested in the statistic releated with the release here are the details:

not really good in finding secrets