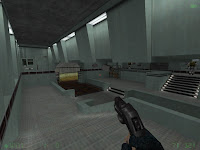 None, it's just a remake for opposing force of the second map from Doom II

Design has certainly more an arena approach in a concrete mixed with HL theme Design, it's quite limited but well done with some good architecture and layout . the attention is correctly put together with some custom content. A fair design for sure.

Gameplay is a mix between trigger, hunting grunts and speical squads with lots of respaw to add some 'living time' to this short map, it's perhaps a little to small with tiny area that doesn't really provide place to make the hits deadly simply by the fact that combat is quite close. appart from the combats it's a simple travel from place to place to activate trigger in a non linear crossed progression it's quite obvious and has only as aim to find an elevator exit...and that it

In conclusion:A short arena style release well enjoyable for a small experience limited to a quite restricted place. 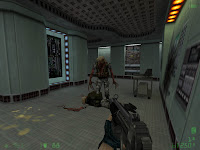 No Freedom for Half-Life 2 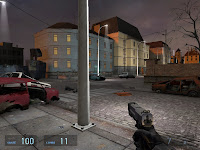 None mentionned but it's part of an invidual guildhall project ( cohort 5), made for their graduation terms.

Another short example of people who will be working in future gaming company are able to do .

Design has a good external feeling in a night city under combine's control. The outdoor architecture is quite enjoyable, more than indoor and organized in a quite squared area the main objective is divided in 3 parts: rnter the main building, search for a switch, get to the roof to escape. The indoor is build in a classic way according an everyday house that has been transform as a general head quatter of the combine force, it's just a succession of room with general layout that are well interconnected even to outdoor by windows, it has a maze feeling so that you will perhaps not directly find the next thing to do.

Gameplay is typical FPS progress and kill to escape, you will encounter lot's of combines respawn when you travel back, you will open all door to find what to do and access to the rooftop to escape there the challenging is well put together with combine reinforcement, trip mine drop (I think it's one of the first time a see this in a custom map) and a strider to need to be destroy to exit the level. the ambiance is perhaps the small thing that is missing in this release like a little bit more scripted progression.

In conclusion: In a standard design way, the author succeed in ceating a average experience hightlighted by the end combat. 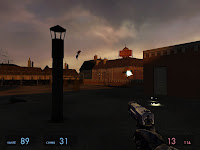 Title: MECHANIZED DEATH: An Army of None 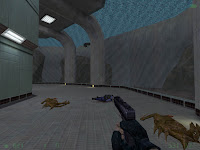 None, just a small make from scratch with no real storyline just another escape from black mesa with an opposing force point of view

I quite like a ll release from Jed and just nothice that after a lot of good quake 2 mission he also did some experiment with HL even if he appologize a little for the triger/scripting event that isn't really is cup of thea.

Design Has some great looking area with a mix a let's say corridor, hallways and pipes (perhaps a little too much) the design has certainly a touch that I like when I play custom maps it's certainly a good feeling to travel and to shine up in a huge open area that easily create a interesting atmosphere this happens several time and i like it. From the general design it has a lot of Quake2 touch and especially the last elevator/exit zone all in all it's well interconnected and enjoyable to travel through.

Gameplay is the classic one linear progression, increasing little challenging combat. and some small puzzle mostly triggering. In a mix with the architectured it's really enjoyable but defenetly too short

In conclusion:A good mix between design and (too easy) combats gives a short but correct gaming experience that it's worth to be played. 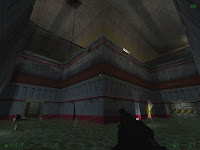 Title: Assault on a Strider Base : Rosa-Sewer 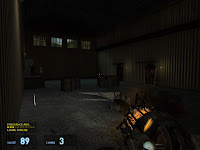 None mentionned but it's part of the assault on a strider base guildhall project ( cohort 2), made for their graduation terms.

I really like those small guildhall mission they are most of the time short and not perfect but finally it produce a correct playtime enjoyment worth to be mentioned.

Design is good with well put together area and a same grey_dark theme that add a certain touch to this map (like if the experience that take place in this hypothetic future was set in a polluted...distroyed environement where people don't really have the will to live). The general theme is base upon concrete sewer and interconnection, some 'on text' messages will lead you through this maze not only focus on a self floor gameplay but with lot's of up and down progression and also adding some outdoor area.

Gameplay is quite easy with metrocops, combines, headscrabs...so classic enemies. Puzzles are limited but make you progression oriented in a non too linear way and will lets you be busy for a short thinking time. The ambiance is perhaps what lacks to this map not a lot of sounds, voice messages would add a better immersion into this unit, and some more challenging place would also have increase the interest of this map...but it's not really part of the main objective of this map which is to mention to teacher the knowledge of the hammer engine.

In conclusion: A short enjoyable experience that lacks some more combats and a background ambiance. 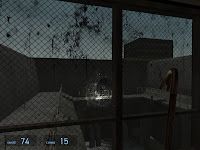 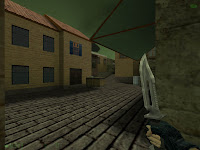 FALLBACK FALLOUT After the escape from the Monte del Oscuro facility, Corporal Shephard and his fellow marines have been assigned to a hardship post in the Antarctic. Icy cold winds, eternal ice and snow and 6 months of darkness in the winter. The Top Brass didn't look kindly on having their research facilities being overrun by aliens even if it wasn't your fault.

FIRE This is a flashback level to a Balkan town. Objective is to rescue a UN representative from a Warlord. Then you flash forward to the Antarctic.

ICE In the Antarctic, Shephard and his squad are guarding yet another research base in the middle of nowhere. It was a quiet posting until a mysterious alien artifact was found while drilling ice cores. The secret is out, and foreign powers desire the artifact. Your orders are to defend the base and the scientists at all costs.
Hopefully, a happier ending is in the the works for Corporal Shephard.

Note: You can find at several review site: Planetphillip,tenfour,... Both releases reviewed (Fallback and Fallback,Fire & Ice) playing this map pack gives you the oportunity to play directly both releases in a one whole unit.

Finally I played this one from Peter who did several small releases before this one and also worked for the Intolerable Treat mod.

For this release as a first part Peter took is previous release for Opposing Force (Fallback) and add a new consequent episode.

Design is a mix with correct layout, interconnection, good use a texturing and prefabs with a excessive use of copy/paste sections, so that it leaves a impression of repetive progression. For the rest and not taking in account the hallways you visit and the too squared design in some places, it's quite from good quality. You will also be catch by the quite huge progress in design Peter made while you pass from the first (old) part that seems a little poor and the second where several place,especially through use of prefabs, really shine in interest.

Gameplay is quite challenging in different parst and this will provide an extension of playtime through the fact that several battles will take time to be completed. Porgression is mostly steight forward but add external help (team squad mate, scientist, key search) to break the repetitivity of this experience. Some external scenes will also sometimes happen to add for the spectator some visual experience witch I really like in Half-Life approach. You will encounter all weapons from HL and OF and will find health and ammo when you really need them, I died a couple of time but it was never frustrating...Puzzle are mostly easy to solve out and I was only lost a little in the wind mill area just because the door trigger-generator wasn't that obvious for me.

In conclusion:Even if regarding the design it's sometimes a little bit poor or too repetitive the experience and general layout are above average, like the gameplay...in the hard way. 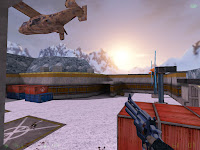 ***previously reviewed on my french blog*** 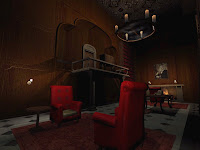 A short singleplayer map with all new textures and (animated) models. It's also my first singleplayer map for doom 3. I wanted to give this map a totally different look than the mapsyou see in Doom 3. I got my inspiration from the movie Rose Red and the Disney attraction"The Haunted Mansion". I love the feeling of those two and the Doom engine fits perfectlyfor this type of environments.

This is the first and perhaps also last release from the author that worked after this one on a quite interesting modification for Doom3 but without any update since almost 3 years.

Design is impressive and immersive, highly colourfull to create something unique according FPS experience, the nightmare seems this time just behind you door ... If you look to the way the map was build and the texturing added it's suprsisingly well done for a first release, every new place visited is another eye candy...nothing to complain just a full visual enjoyment.

Gameplay is simply trow into this map to give a objective and add some 'trilling' ambiance to this release, no real puzzle or heavy fight and this could be the only minor point of this one, you will easily fight you way through the cave witch will sound as the end of it.

In conlcusion: This is a particular experience more base on visual and ambiance than on gameplay, you will fast progress through this one a little out of what we are abilited to see. Even if it's a quite short experience it's really a must seen one. 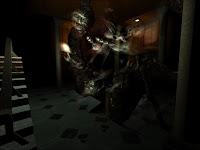