Test: Made on average skill using the default setting on my computer [ AMD64 3400+ - 2Gb Ram - GEforce 6 128 Mb] some really small slowdown just limited to the resume episode one at start .


Cost: Include into the orange box sell arround 30€ or if you have a steam account just wait like a did to some anniversary were valve propose the game at a really low price got it for 4€

Half-Life® 2: Episode Two is the second in a trilogy of new games created by Valve that extends the award-winning and best-selling Half-Life® adventure.

As Dr. Gordon Freeman, you were last seen exiting City 17 with Alyx Vance as the Citadel erupted amidst a storm of unknown proportions. In Episode Two, you must battle and race against Combine forces as you traverse the White Forest to deliver a crucial information packet stolen from the Citadel to an enclave of fellow resistance scientists. 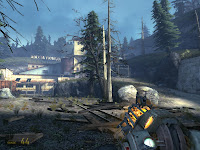 Through 18 maps, you will be once more dropped into the Half-Lfe experience just after the train crash that happens at the end of the little disapointing Episode one. This time you mission will be surprising in term of happening and  discovering what's next. The design is still pure classic Half-Life but the new texture used, new enemies and skyboxes really creates some marvelous scenes that really gives a fresh breathe to a games that doesn't seems anymore up to date. Travels through all kind of new area from outdoor (most) to indoor (like the interesting travel through those caverns) really creates a catching experience enhanced by the help of Alix Vance that will guide and help you during this whole unit...she has also beter in her woman's rule...talking a lot.
The cutscenes, new caracters (include enemies) really add values to this opus and help really to minimize the fact that the gameplay hasn't really been improve and is still made out of the same bottle witch his a mix between search, fight and solve in a quite oriented gaming environment
No real new weapons of feature for our friend Gordon just some improvement. The mission is a little more cooperative to the fact that somebody is most of the time behind you to orient a little the gameplay...I'm still waiting for the automatic gun of Alix and hope we will be able to play with it in next chapter 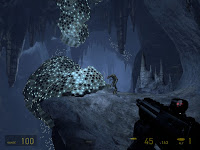 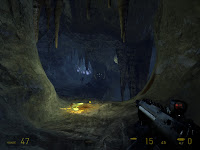 Gameplay
--------------
Gameplay is what we have got before except that here, there is a kind of bigger orientation of what's the next step and this mainly through Alix intervention. There will be some special surprise in this opus and more psychology will interfere this time because you are now really part of this team that will save the world and also because you are the most relyable people to help them in this qwest.
On you qwest two new enemies (not taking in account this fast zombieguard bomber) are waiting for you one in the caverns another in those outdoor section both will make you life less easier and this is certainly another good point even if somewhere it nearly turn into a frustrating experience with that end battle to save the launch base...
We can certainly regret that there is no new weapons and that in place of and inhanced car there wasn't something really new (moto, quad, truck...) but even if those small imporvment could felt a little disapointing it was certainly 10 times better than the new features of Episode one. We could have also hope for some weather changing but the rain or snwo wont fall during this episode. 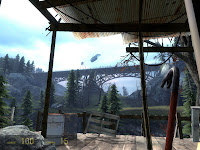 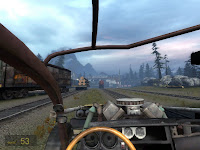 This is perhaps not a simple game with all it's feature but simply an new episode for a  well know game so the change are not really that important.
Still through some minor addition and change Valve really could add some additional value to a game that was really waiting for it after a little disapointing first Episode.
The fact that some external even took place in this one, that external intervention of team mate (Alix, Vortigaunt, Scientists ) orienting the gameplay in a quite enhanced designed environment makes from this mission a must have addon for all real Half-Life fan, Playtime was just good like this quite difficult end battle that nearly turns into frustration...the interesting ending just letting you brain full of upcoming hypothesis with has guidline Alix just let us hope it won't stay long before Episode 3 comes out. Don't hesitated  to get this game through steam  if you have the opportunity and just keep in mind that through a lot of  excellent custom maps and mods HL fans simply wanted to thank valve to have finally developped and interesting and enjoyable (through it's usable content) addon. 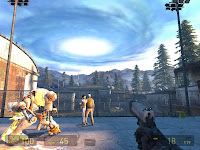 Too Many Crates for Half-Life 2 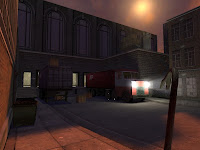 none behind you are just in a warehouse full of crates and you only aim is to break them, but pay attention there are some particular crates that can open well hidden place, you aim is simple just try to destroy all of them (1000)

I need to admin that after a first rush i just didn' t directly understand that you need not only to break but only to think what to do end when to brake, so I really after 10min wanted to stop this one...

Even if the main objective in this map is to brake crates the author didn't only focus on it but also create an enjoyable 'crates depot' where you will need to walk arround pushing button to activate some chain transport or conveyor belt or transport colored box that have different use it's certainly not a big map but the way you travel through really makes you like it a lot the author also well squale the entire map and pay attention to those unreachable area, the well organized building with travel on 3 floors and small detail like the truck

We all like to smash those crates to find something behind but when you have so much to brake could it be also fun...the answers was for me without no doubt, after a second more thinking try: YES.
You hav really to think in wich order you will make you work and also you will fast find some special colored crates that have a particulary behavior and use of them magic, exploding, burning,attaking...

there is also some voice help in some case (not always from perfect understanding) and the motivation when you reach a certain amount of braking crates  travel through elevator or stair also is a question of personnal aproach  and will certainly increase you gaming time.

In conclusion: Regrading this special mission a too highly detailed review will certainly spoil a lot of enjoyement so there is anything to detail more just make you best through thinking and braking to reach those 1000 broken crates. 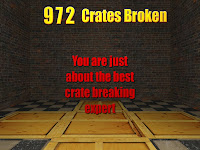