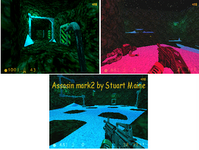 21 hours ago, a top secret government agency sent a team of it's elite assassins to a government laboratory on a mission to neutralise all of the scientists there. When the assassin team exceeded its mission time and failed to report in, the agency decided to send its lone, experimental Assassin Mark 2 into the laboratory in an attempt to complete the mission.
Your mission objectives will be supplied to you when you enter the laboratory. If you cannot complete your assigned objectives you will be expected to terminate yourself.
Good Luck

This is one of the three releases that Stuart Maine did for Half-life (he has made several maps for Quake1 including Assassin 1 ) After improving himself through mapping for Quake, Stuart skipped (moved) to Half-Life… with success.
Stuart has really his own mapping style with a different approach (does something different than others). In Assassin mark 2 you play the role of an … guess what? and your mission is to eliminate 5 scientists who have the power to destroy the Earth. The whole mission happens in an atmospheric base (green-black wall texture, concrete structure and snow). This 4-map pack features a well balanced gameplay between fights and puzzles (sometimes tricky). Surrounding atmosphere enhanced this pack especially when the music from the original game starts, it’s never too hard and it’s gonna keep your interest for less than 1 hour.
Worth downloading especially if you got bored of the classic HL pack.

Note The first Assassin release is worth to play so if you never try it on Quake 1, it’s never to late especially if you like Challenging gameplay…