Premonition of Angron for Quake 2 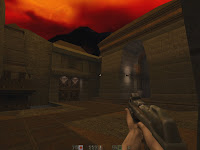 Warlord Angron has now gained power and command, this potent enemy to our civilisation has located his powerbase in an ancient retrofitted installation situated in a remote area of the planet Stroggos. In an early operation our Senior Commander JC was killed in action, Central Inteligence belive that Angron is planning to extract the information in Commander JC's head and use it to cripple our future operations.

This four maps unit is the second release from the author after Angron Installation. His first attempt that was short in gameplay and quite repetitive in design (especially regarding hallways) was a first good experience for whitch i just hope to come across a sequel.

Premonition of Angron was certainly what i was waiting for: Design is this time above average to even impressive in some part, the theme (Secret base) is well respected over the 4 maps with a good storyline and clear objectives. The is a whole of thing to explore (include interesting secrets area) in a huge complex base.

Architecture is well use and makes classic squared place mostly forgotten... linking through all those master place is not an addition of simply hallways (even if in the sewer part and the cave they are present) but makes a mostly prefect transition through all main places. Attention to detail though the sewer organisation or storing rooms (I really like the ammo on those palet box) make it's a not boring experience. All maps are well linked in a nonlinear way so that there is no oriented qwest at start (you need to collect and activate things but not in a certain order).

Gameplay is well balance between fights, traps and general objectives; the complex has really a filling of being huge and it's not always evident to find the correct short path to 'the next thing to do'. Even if sometimes you may think you're lost, the general progression in an enjoyable environment makes it not boring, Challenge is omnipresent and if you look for powerfull weapons you better check for secret places (all the ones i found where put in a constructive way arround the complex). The way you travel through place and kipping in mind not accessible place will make this release for some of us a real pain to complete but it's defenetly worth finishing it.

In conclusion: The second attempt from Jonas to make a Quake unit is impressive. It contains mostly original textures and doesn't real come with something unique but the way the complex was build and the whole interconnectivity through theme and gameplay make it really an enjoyable episode to play through. Pay attention not to be lost for age in this military base! 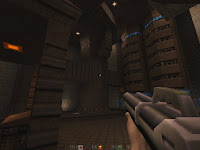 Note: for the one interested in the statistic releated with the release here are the details: