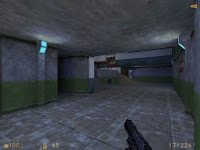 Half-Life: Chronicles once again places you in the boots of scientist Gordon Freeman. Trapped in the Black Mesa Research Facility, and pursued by humans and aliens alike, you must use your wits (as well as firepower) to stay alive. However, Chronicles takes place in what could be called an "alternate timeline" wherein certain events in Half-Life unfolded differently.

So i have still a lot of HL stuff to play and decided to give a try to several one that seems back then, in HL stoneage, to catch the attention... This one, release as a preview of upcoming stuff that never did tried like for opposing for to imagine at a certain points another storyline...for making this more attractive, there are some new sounds, weapons and texturing.

Design is great, you really have the impression to play something professional; texturing, flowability through the collection of maps is perfect (especially taking in account it was released more than 8 years ago) new weapons model are also fitting well, the architecture is well put together with a well balanced use of texturing from classic to newest one. The architecture and use or environment layout make it easily linkable to the original game but this is more a valuable comparaison.

Gameplay is also well put together more oriented on grunts combats (you won't see a lot of aliens) than on puzzles, progression is quite obvious and misses perhaps some outdoor area, there aren't a lot of stuff required to make you progress: from a moving element to a keycard all seems quite obvious, the G-man is always present and will in some place appears.
The travelling is mostly done by foot progression with the exeption of a memorable subway ride with some shooting that remind me from the experience that happens in movie like the Goonies or Indiana Jones first opus...but sadly the expeirence just stop abruptly with a 'to be continued...' on text message that never happens after this release.

In conclusion: Back in 2000 this first release from radioactive software looks really promising with a classic mission start used some original element but also a really good design...sadly there was never a sequel to it. for the one who never gave this one a try it's not to late and regarding the small playtime experience it's defenetly worth. 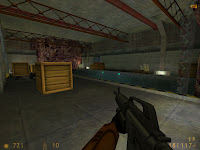